Skip to content
BeAD top bar menu
About Us

What People Are Saying

“BeADisciple is such a wonderful place to grow! I have taken more than a few classes from BeADisciple and have developed friendships from around the US that have continued long after the courses have ended and these relationships continue. I give thanks to God for these relationships and the opportunity given to create them through BeADisciple.com!”

“On-line classes are so convenient and cost effective. One can complete the program so much faster than waiting for the classes to become available through the district.”

“I am HOOKED on BeADisciple.com. I started taking courses for my Certified Lay Speaker certification but after taking 3 courses with your amazing instructors, I love the classes. I have started taking classes for other areas of my responsibilities in the church and even signed up for some classes just for my own faith. I am sitting here between classes and bummed that I don’t have a class I can post to. I will be taking classes from BeADisciple as long as they keep coming up with them.”

“I loved interacting with the other members of the class and reading about their challenges and revelations. We are all in different places in our faith journeys and some peoples comments were so profound. I had never taken an online class before and didn’t know what to expect and I loved every day of it.”

“I liked the self-paced nature of using Blackboard, which gave me time to reflect on others’ comments before I added my own to the “conversation”. In a live classroom setting I often think of things I would have liked to say or say differently after the class. This setting gave me time to consider my comments.”

“This was my first experience with a BeADisciple.com course and I thought it was better than face-to-face LSM courses I have taken. The daily format (vs a full day or 2 half days) allowed us to pause and process the material.”

BeADisciple.com has provided quality online educational experiences with roots in Wesleyan theology since 2006. We offer online studies, workshops and courses on a variety of ministry, formation and leadership topics. All of our courses offer CEU credits. Our goal is to make rich learning experiences accessible to church leaders and laity, no matter their location or life situation.

BeADisciple is a community of people who are invested in becoming better Christian disciples. Courses are conducted in small groups with a trained facilitator or a certified instructor, so learners and instructors have an opportunity to get to know one another. Groups begin together, progress through materials, and end together. Individual learners participate at the time of day that works best for their schedule and are not required to be online at the same time as other learners. Our courses are open to anyone, and there’s no membership fee to be a part of our community — simply enroll in a course that interests you!

The Institute for Discipleship

BeADisciple.com is one of several programs of the Richard and Julia Wilke Institute for Discipleship at Southwestern College, a United Methodist institution in Winfield, Kansas.

To learn about all of the Institute’s ministries, visit www.institutefordiscipleship.org

Our background and primary perspective is United Methodist, but we believe in an ecumenical mission and have instructors from a variety of denominations.  Learners from any Mainline Protestant (Lutheran (ELCA), Presbyterian (PCUSA), Episcopal, United Church of Christ (UCC), American Baptist, Friends/Quakers, Disciples of Christ, Reformed Church in America, Metropolitan Community Churches, etc.) or Wesleyan (Nazarene, Free Methodist, African Methodist Episcopal (AME), Christian Methodist Episcopal (CME), African Methodist Episcopal Zion (AME Zion)) denomination ought to feel at home in most of our courses, and learners from any Christian tradition will be able to learn and grow in their faith. 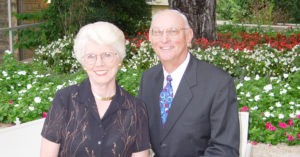 Named for Bishop Richard Wilke and his wife, Julia, the Institute is dedicated to carrying on the Wilkes’ legacy by providing educational opportunities that build Christian communities, encouraging small groups that sustain and uplift their members, engaging in high quality theological content, and resourcing a global church.

Bishop Richard (Dick) Wilke is currently serving as Bishop-in-Residence at Southwestern College. Together, Dick and Julia coordinated, designed, and wrote the DISCIPLE Bible study, a training for Christian leaders, with nearly three million graduates in more than 10,000 congregations in 30 denominations. The DISCIPLE series is now available in a wide variety of languages, including Korean, Spanish, French, German, two dialects of Chinese, and several Southeast Asian languages.

Elected to the episcopacy of the United Methodist Church in 1984, Bishop Wilke served for 12 years in the Arkansas area. While serving as bishop, he worked to emphasize church growth and evangelism, at all times maintaining his love for the local church. He served on boards of colleges, hospitals, and on general boards of the United Methodist Church. Dick continues to reside in Winfield, Kansas, after Julia’s passing in 2016. The couple has four children, nine grandchildren, and six great-grandchildren.